A quick review for a small book. 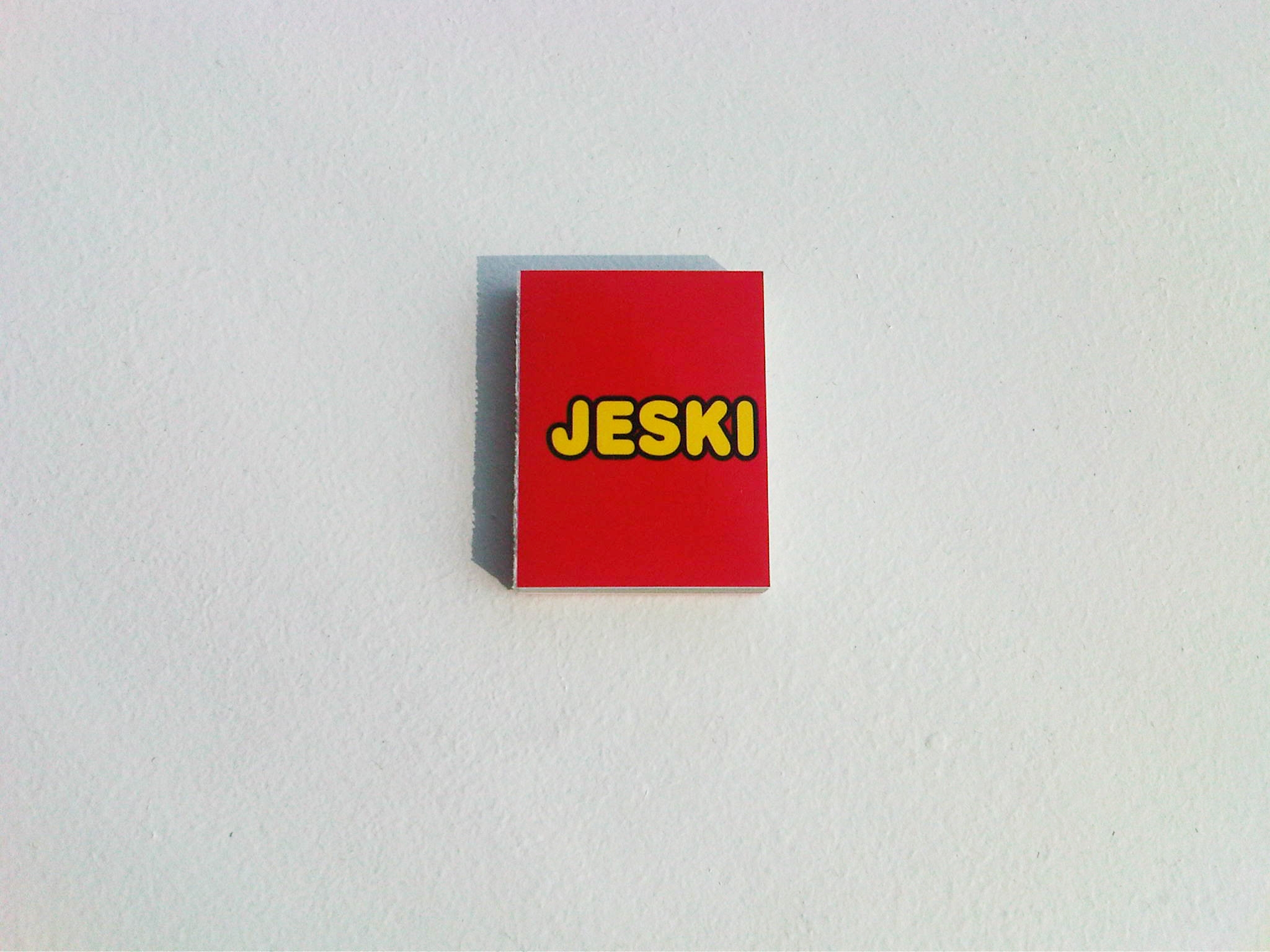 ABC Book is a miniature (~4cm x ~5.5cm) tome that uses bright colors and a bubbly font to present a potpourri of Jeski’s advertisements and public service announcements. It doesn’t actually contain the entire alphabet–English, Korean or otherwise. Selected words, which aren’t even in alphabetical order, are illustrated by images as a set up for presenting one of Jeski’s projects.

The projects playfully position the photographs in real world spaces making them into clever or humorous adverts or public service announcements: A pair of out stretched hands illustrates the word “Help;” turning the page we see these hands become a cafeteria tray liner exhorting a comfortable worker taking her lunch to donate to City Harvest. “God” is illustrated by the God of Michelangelo’s Creation of Adam. Turning the page God has been installed on an SVA elevator door; going one page further we see a student pressing the elevator button and meeting God’s finger. He becomes Adam at his creation, albeit an Adam in cargo shorts.

On the shelves of the library at The Educational Alliance Art School, where I used to teach, were several photography annuals from the 1940s and 1950s of photographs ranging across all genres. I looked through these on many days before classes. It was amazing to me how some of the photographs looked incredibly dated, even older than they actually were, while others remained fresh, vital, vibrant.

Kim Han Yong’s Commercial Photography & the Birth of Consumer is similarly fascinating time capsule from the past. A big difference is that this is a contemporary retrospective reconsidering the historical context of Kim’s advertising photography from the 1950s through early 1980s.

Kim Han-Yong’s photographs are inextricably linked with the ads to which they belong. With a few exceptions, Kim’s photographs, if taken out of the contextual space of their resident advertisements, would fall flat. (In all truth, some of the images fall flat even within the context of the ads and others are saved only be their social or pictorial weirdness.) Regardless of how each works as a photograph, Within the context of the ads, the photographs as a whole become a rich trove of historical suggestion and cultural foundation. This is one aspect of the origin of the South Korean consumer state.

Commercial Photography & the Birth of Consumer [sic] presents a cross section of Kim’s advertising work along with three essays (in both Korean and English) placing that work into a social historical context. Each section of the book has introductory text pulled from an interview with Kim (in Korean only). The book’s format is very much in keeping with the nature of the advertising posters and photographs being presented. The cover is bright and glossy–like a textbook from middle school. The book is large without being oversize. Posters are generally presented one on each right hand page with captioning info on the opposite page, though those in the section titled “Charm of the Non-Real” are run across the gutter which ruins them. Several posters have outtakes from the shoots presented as a contrast to the retouched ads. Captioned information for each poster includes client, designer, model, technical photographic information and other project information as available. This is not the finest Korean photo book I have seen, but its design is very finely considered–workroom has really hit the nail on the head here.

The book is broken into four chapters: Classic Beauty, Discovery of Consumer, Portrait of Consumer, Charm of the Non-real and Erotic. They are not based on chronology so much as they are on typology. We begin in Classic Beauty with the model as spokes-person. These simple ads associates a product with a beautiful and/or famous person, but we are not given a dream that to aspire to beyond that association. In Discovery of Consumer we have a narrative suggestion but remain in an abstract space. These ads implies that this product will make us happy or beautiful or desired or fulfilled or whatever; though the narrative remains simple and relational. In the Portrait of Consumer we are shown the black and white world of reality in which these ads operated. These are the earliest photographs in the book, primarily from the 1950s and early 1960s. The shift from the color advertising to the black and white documentary photography effectively presents the challenges and opportunities that existed for advertising in building a consumer society during this time (as well as shows that in some ways things are what they ever were). Charm of the Non-Real is contemporary advertising: here narrative is complex within certain cliched advertising tropes–sex, money, love, happiness, and we are presented with an entire environment and an entire lifestyle in which the product exists. There remains plenty of weirdness in the photographs, but these are modern advertisements that could be from any western society at that time if we changed the type face. Erotic is a handful of suggestive but chaste photographs of beautiful (and natural) women wrapped around phallic stacks of oil cans or wearing bikinis and holding gas pumps… these look more cute than erotic to present day sensibilities. My favorite from this chapter is of a woman in a bikini kneeling on a beach, leaning forward, mouth half open in either ecstasy or anticipation and she is facing… a young boy who is holding out a garland of flowers to put around her neck. What is the suggestion here and to whom is it directed? It is a weird and a somewhat discomfiting photograph. It’s a good weird, though. And in general, that is what most of the photographs are: a good weird.

The essays at the end are a mixed bag. It’s possible that poor translations contribute to this.

Lee Young June’s essay is the most astute of the three and the most specifically about Kim’s photography and the advertising posters of which they are a part. The central ideas running through her essay are that “the feature of [Kim’s] photography more important than indexicality is that it trains the viewer sensually” and that “…it is senseless to compare commercial photography to reality. Commercial photography is like futures trading in that it is a preview to the beauty and fantasy that do not exist yet.” I especially like that second description of advertising photography. This idea of the image as aspiration follows through into Her Boyoon’s essay. Seo Dong-Jin’s writing is more political and is about Kim’s photographs only in as much as they are a convenient jumping off point to speak about economic topics, though towards the end he describes Kim’s “Photography Research Lab” as a place where objects were not photographed but instead are imbued with added representational value to make them into “the real thing”. This section of his essay, which mostly leaves quotable name checking theory behind, is the most relevant to the subject at hand and the most clearly understandable. (I suspect that Seo’s essay suffers the most from translation and that reading it in Korean I would have a more favorable view of it.)

Overall, this is not the book that I would suggest as a point of entry to Korean photography. The work is more historical than personal and is presented as such. It feels like a lesson teaching us how the world became what it is and the importance of this figure. For those interested in the development of advertising, the building of a consumer society or the economics of consumption, though, this is a fascinating book. It doesn’t just look like a textbook, it is a textbook.