Somehow it’s been almost a year since the last post here and, a year on, we’re back to Photoville. MUG Publishing again has two containers showing the work of several Korean photographers as well as a dozen or so publications. Jinhee Bae’s follow up to her What a Wonderful Day portraits is a lovely set of portraits that revisits her original subjects as their lives have continued onwards. Kim Gyosik’s photographic experiments are intricate and beautiful; I’ve been a fan of his work since I saw Pla-Wars at Trunk Gallery in 2009. Jaegu Kang’s (anti-)portraits of Korean soldiers are a stark reminder of the social machines within which individuals are made part of the whole as well as within which social bonds flourish between individuals.

The publications are simple and clean in their design and presentation of the photographs and explanatory texts–more reference catalogs than fetishistic photo-book objects.

Photoville itself is overwhelming in the amount of work being presented. It’s almost impossible to see anything given the weight and noise of the festival’s volume. Kim’s, Bae’s and Kang’s work stood out from much of the work in the festival.

Taewon Jang’s Black Midday presents an unassuming face. Aside from a single thumb cut index and the heft of a brick, its exterior presents none of the turmoil within. I almost passed this book by, which would have been a mistake. Once the cover is opened, the book begins to present a rich and out of the ordinary experience full of terror and loss. In it’s colophon, there is this description: “the book examines the psychological situations drawn from reality and fiction, memory and oblivion, absence and presence.”

The book’s 340 pages are broken up into four sections: Text, Generic Landscapes, Plates and Victims.

Text contains correspondences between Jang and various Japanese friends (many of whom are photographers or others in the arts) after the Tohoku earthquake as well as an essay by Suejin Shing, who I have posted on previously.

Generic Landscapes comprises images taken in Japan after the earthquake. The images are dark and intense; they are printed full bleed or with black borders; this section is the only one with a gloss coating. The photographs were taken under moonlight and have an eerie beauty. In opposition to the beauty of the images is the fact of the desolate ruination. 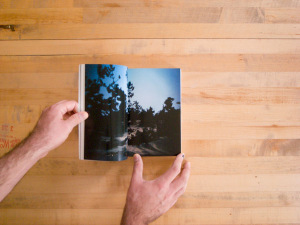 Plates is broken up into two subsections: the first, on uncoated white pages, is a series of prints rephotographed repeatedly in such a way that the viewer’s sense of the image wavers in and out. The image disappears into the vanishing point of perspective. Mixed in with these are photographs of paper artifacts such as business cards, hand written notes or sales brochures that give the address of the plates in the second subsection–a sort of travelogue. The final image of this subsection is the image that has been buried beneath the process of rephotographing: a small building covered in and being subsumed into debris. The second subsection within Plates is printed on black uncoated paper. The images are of interior and exterior spaces that Jang visited while making this work: offices, shops, homes; courtrooms or government hearings; landscapes, people in the street. The damage of the earthquake breaks into this through a photograph of a large ship on dry land and a desolate lot with a framed image from the previous section.

Victims, the final section, is a series of installation shots of mixed media portraits. These portraits–presented first as a thumbnail image for reference, are photographs mounted to wooden forms which have been folded and otherwise manipulated. The portraits are fragmented; the subjects likeness is deformed.

Of all the photography books I’ve acquired in Korea, this is among the most ambitious. We begin with the fear of loss. Jang is reaching out to confirm that those close to him are not lost to him. Conversation confirms existence. The book continues on into terror. The landscape photographs of the sites of the disaster are terrifying in their affirmation of the power and irrational destructiveness of nature. Even at a remove of days, weeks or months, the fear of potentiality or eventuality remains. We cannot remain in a state of terror or shock, however. Plates transforms terror as it dissolves into ongoing everyday life. The rephotographed image is a stand in for the oscillation of fear over time as we are removed from its immediacy. Everyday life eases our mind. We are left with the image to remind us. Victims brings back the terror, but does so in a way that reminds us that this terror is not nature’s alone. These portraits are of Japanese people in New York; they are not victims of the earthquake. They are victims of the artist: it is the artist who has deformed their likeness and associated them with the earthquake.

The earthquake is not the subject of this book. It is our response as human beings that Jang is interested in. How do we see? How do we remember? Do we respond to, create or invent reality?

Dashwood Books in NYC has this book, as does Photo Eye in Santa Fe. It is also easily available at Book Society or Your Mind Bookshop in Seoul.

**This post was first published in a “Book Notes” post on the daily_up.
***I stole the book cover image from Photo-Eye because I haven’t had a moment to shoot a picture of the book. Sorry Photo-Eye.