Several years ago, my wife and I talked our way into a gallery in the Samcheong-dong neighborhood of Seoul that had just closed for the day. Ji adores the work of photographer Byung-Hun Min, whose work was on display at the gallery, and wanted to inquire about a print. She was ready to spend some money on one but was stopped in her tracks by the prices: approximately $20,000. Though the prints (from Min’s Snowland series) were breathtakingly beautiful, we bought a couple of books instead.

Weed was one of those books. It is understated. The beauty of its design trickles down to the smallest details. Thought it would be wrong to call this book a masterpiece, it is masterfully done. The selection of photographs and their presentation is a nearly perfect encapsulation of Hun’s photography. The photographs in Weed do not present an overview or retrospective of Min’s oeuvre. Rather they are a singular and specific project from which the entirety of his photographic pursuit can be extrapolated.

Weed comprises photographs of weeds that Min made during daily morning walks over a five year span at his studio on the outskirts of Seoul. Just as the weeds sprout from whatever unlikely crevice they can gain purchase on, so too does Min find opportunity in an unlikely subject. Weeds are not Bae Bien-U’s majestic pine trees through which ancient echos reverberate nor even Min’s own haunting, minimalist, grand landscapes. These are simply everyday weeds behind the plastic sheeting of greenhouses and poking through the cracks of concrete walls. They are as quotidian a subject as one might imagine. And yet, Min makes of them something far greater.

Two photographers out of the Western canon come to mind: Karl Blossfeldt and Harry Callahan. They have nothing to do directly with Min’s photography. They come out of entirely different traditions but provide several counterpoints from which we can better understand Min’s Weed.

Blossfeldt’s 19th century photographs grow from the seeds of 18th century scientific observation. His methodology for photographing natural plant forms was rigorous. Plants were each photographed in profile against a light gray background. Everything is in focus and sharply rendered. They are highly factual. According to a press release from the Whitechapel Gallery regarding an exhibit of these photographs, they were used primarily as teaching tools until Blossfeldt published them as the seminal Urformen der Kunst in 1928. The minimalist compositions were intended entirely in service of the subject being most clearly described. 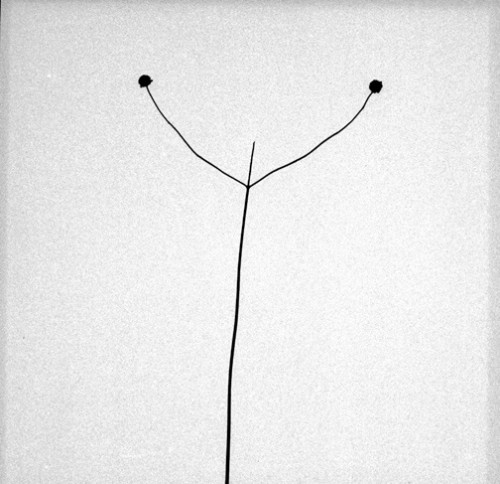 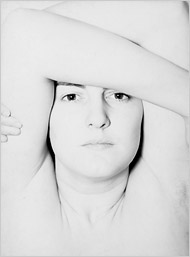 Min’s photographs do not operate in these ways. While his routine of daily photography might have an echo of Blossfeldt’s rigor, he is not concerned with factual recording primarily. And though he might reduce compositions to their minimum as Callahan did, Min allows a struggle between his subject matter and the form of their representation. Rather than set his weeds before a neutral ground, Min allows the ground to come to the fore. The weeds press and push against not only the plastic sheeting and through the concrete walls but also against and through the bounds of the photographic surface. The edges and surface imperfections that were the hallmarks of Polaroid Type-55, which Min has employed for much of this series of photographs, blend with the surfaces and weeds which are depicted within the emulsion.

Blossfeldt may have seen the plant as an artistic structure complete in its own artfulness, but the nature that produced that artfulness is buried by the process of representation. Nature has been made clean and neat. Likewise, Callahan created photographic playgrounds that subverted the subject by their representation. In their extreme reduction, the photographs were about their own form as much as the subject depicted.

Min’s photographs embody the fervor of life. The division between form and subject begins to break down–as though the weeds themselves could break forth from the photographic surface. They do not submit themselves to their representation but instead struggle mightily against it as they struggled mightily out from between mortised stone or against a greenhouse window.

The design of Weed is simple in its presentation of these photographs. There is enough struggle within the photographs; to struggle against overbearing design would demean them. Any treatment other than simple would have been inappropriate. The photographs are presented generally one to a spread with the image on the right hand page and a negative number as caption on the left hand page–though there are several spreads across which two images square off. The dominant color is gray: gray cover, translucent gray title page, gray text and gray photographs. The reproduction of the photographs is extremely true to Min’s low-contrast, gray printing style. The design choices are an extension of this photographic style. (I make this judgement based on prints from the Snowland series I have seen and the reproductions of those images in a sister volume to Weed, Snowland.) My one complaint is that the images are small, only slightly larger than a contact print from a 4×5 Type 55 negative.